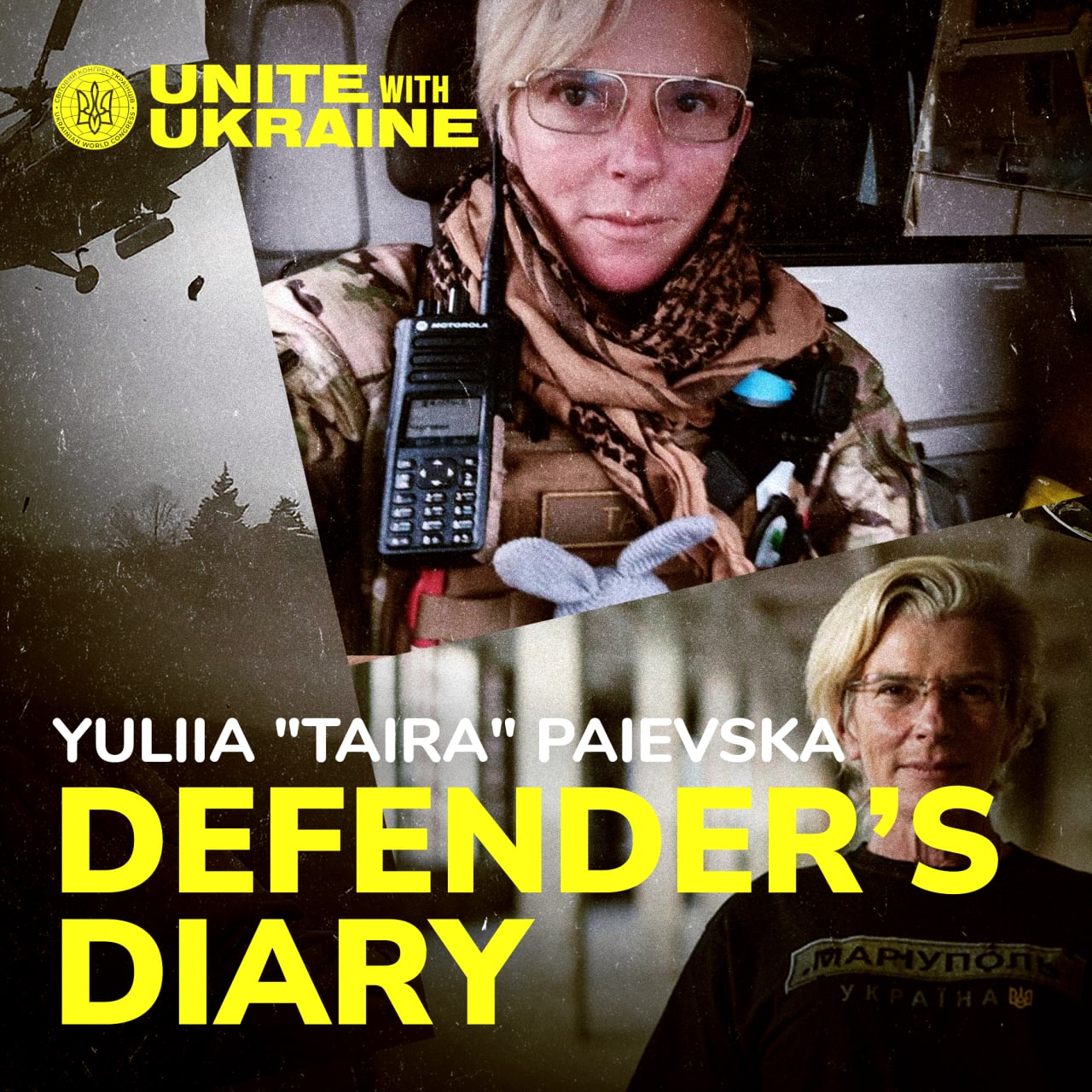 Yuliia "Taira" Paievska, 53, is a Ukrainian soldier, paramedic, and volunteer; she is commander of the “Taira’s Angels” unit and of the 61st military mobile hospital evacuation division; a designer in civilian life, she is also president of the “Mutokukai-Ukrayina”Aikido Federation.

From the beginning of the full-scale escalation invasion in February, 2022, until her capture, Julia recorded 256 GB of video of her work as a paramedic in Mariupol. A day before she was taken in to captivity, Yulia hid the memory card in a cotton tampon, and gave it to a police officer, who handed the card over to Associated Press journalists so that they could take the videos out of the occupied city, and make them public.

Ukrainians around the world came out to #SaveTaira rallies in support of Yuliia’s release. In the week after Yuliia's release from captivity, Prince Harry called her to express his support.

Read the text of Yuliia's remarks delivered during the “Wonder Weapon: Ukraine’s Women” panel at the 2022 Halifax International Security Forum in this latest installment of Defender's Diary.

In Ukrainian, “Ukraine” is a feminine noun.

But death knows no gender, age or skin color.

They dream of victory; they are awaiting it.

Every mother will do everything to make her child’s dream come true, to protect her home, her Ukraine, and not be a defenseless victim.

Over the years, I have buried many soldiers, including many women warriors. It always comes with great pain and a sense of terrible loss, because only the best go to fight on the frontlines.

A woman on the frontlines always attracts attention; in order to gain respect and work effectively among your peers, you have to be a little better in everything you do than men who are in the same position, because all eyes are always directed at women.

As a warrior, your skills must be impeccable.

But you also have to be able to calm your fellow soldiers, cook them borscht, tell them a story, and inspire your brothers-in-arms with composure and a smile.

Everyone knows that when a real woman is present at a position on the front, then there is more order and it is more comfortable there.

The majority of volunteers in Ukraine are women; those helping the front in the rear are mostly women; they care for the wounded and the elderly, support the army, ensure the livelihood of cities and villages, work to counter propaganda and as journalists: all of these civilian specialties are focused on victory.

Combat is very difficult and exhausting; psychologically, sometimes you find yourself on the edge.

The victims of this war are primarily women and children.

It is still too difficult to count the number of crimes the russians have committed against women.

You can just imagine what is happening in the occupied territories, where the laws of the civilized world are nonexistent.

Thus, we are infinitely grateful to all democratic countries for their financial support, weapons and air defense systems, for their help in prisoner exchanges, and for the medical care the prisoners are provided.

Occasionally, I hear people say that women do not belong on the frontlines, because we lack sufficient strength to do the work that requires male muscle power.

But these people simply don’t know that we shave our legs, and do our hair and nails, wash our clothes, and somehow manage to dye our hair in the bunkers, when there is not enough water even to make tea, because your corpse’s appearance is very important, in the event the enemy finds it, or if it’s lying on the dirty floor in a morgue: to look dignified, even in death.

True strength is foremost in the spirit.

“Ukraine” is a feminine noun.

Thank you to this forum’s organizers for the honor of participating in such an important event!

As for me, I’ll keep on keeping on... until we meet again.