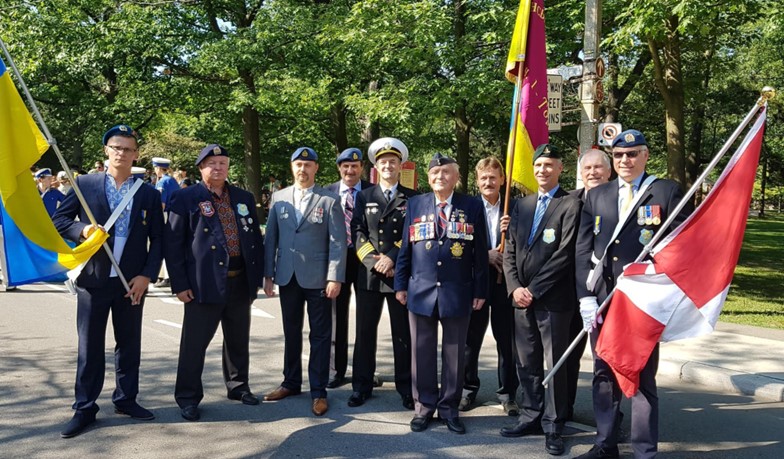 Last month (August 2022), Unite With Ukraine, in partnership with Ukrainian President Zelenskyy’s United 24 initiative, ran a successful “Army of Drones” fundraising campaign. The campaign, which raised over US$ 500,000  dollars , collected funds to buy 3 different types of military drones.  One of our generous “dronors” was Mr. Taras Jackiw, who donated USD $17,900 (CA$ 24,000) on the behalf of the Ukrainian War Veterans Association (UWVA) of Canada. UWU had a chance to ask Mr. Jackiw more about himself and the UWVA:

Can you tell us a bit more about yourself - how are you involved in the Ukrainian community?

I was born and raised in Hamilton Ontario, Canada, and attended Ukrainian school in both Hamilton and Toronto. After performing with the Chaika Ensemble in Hamilton, I became an instructor and later a member of the parents’ committee.  I previously held the position of National President of the Ukrainian National Youth Federation of Canada.

I am currently a member of the National Executive of the Ukrainian National Federation (UNF) and on the Hamilton Advisory Committee of the Ukrainian Credit Union. In recent years, I became interested in the Ukrainian War Veterans Association due to my late grandfather’s membership in the UWVA, and my family’s participation in the Canadian Armed Forces in both WWI and WWII. In addition, my son is a serving member in the Canadian Armed Forces. I currently serve as an executive member of the UWVA and chair of the UWVA's Pro Patria Ukraine Fund.

Can you tell us a little bit more about your organization -- the Ukrainian War Veterans Association of Canada? Who are your members?

The mission of the UWVA is to:

What made you feel motivated to help raise funds for Ukraine - why did you choose to support Unite With Ukraine’s Army of Drones campaign?

The Ukrainian Credit Union Limited (UCUL) and the UWVA initially discussed creation of the fund in late 2021, but after the renewed Russian invasion of Ukraine, Pro Patria Fund’s scope was expanded to provide non-lethal aid to Ukraine. With UCUL providing seed money, the goal was to have a central organizational fund managed by UWVA, for the Ukrainian National Federation of Canada and its affiliated organizations.

The fund has a mandate to provide non-lethal support in the following three areas:

The Pro Patria Ukraine Fund has provided support to individuals in the Territorial Defense Forces of Ukraine, but when the UWVA saw the opportunity to send aid directly to the Armed Forces of Ukraine, the UWVA quickly acted. While the previous support was needed and appreciated, this drone campaign is managed by the Ukrainian government and defense officials who have better knowledge of the immediate and tactical needs of the Ukrainian Armed Forces. Therefore, we chose the Army of Drones UWU project.

About The Ukrainian War Veterans Association

Ukrainian Canadians, numbering over one million five hundred thousand in 2017, have made a great contribution to the growth and development of Canada over the past century. Together with their children and future generations, they enjoy the fruits of their labour and the respect of the Canadian public.

The UNF of Canada and its Affiliates are represented across Canada by Branches of the Organization who, through their Halls, Programs and Activities promote the organization’s Objectives and Values, and offer a source of support, coordination and information for the local Ukrainian Canadian Community. Within 10 years of it’s creation in 1932, the UNF, along with its affiliates had 91 branches across Canada. Essentially every stop along the Canadian National Railway was served by a branch of the UNF. Today, as demographics have changed the UNF’s Branches number 14 across Canada, serving most of the Major urban centers where Ukrainian-Canadians reside.