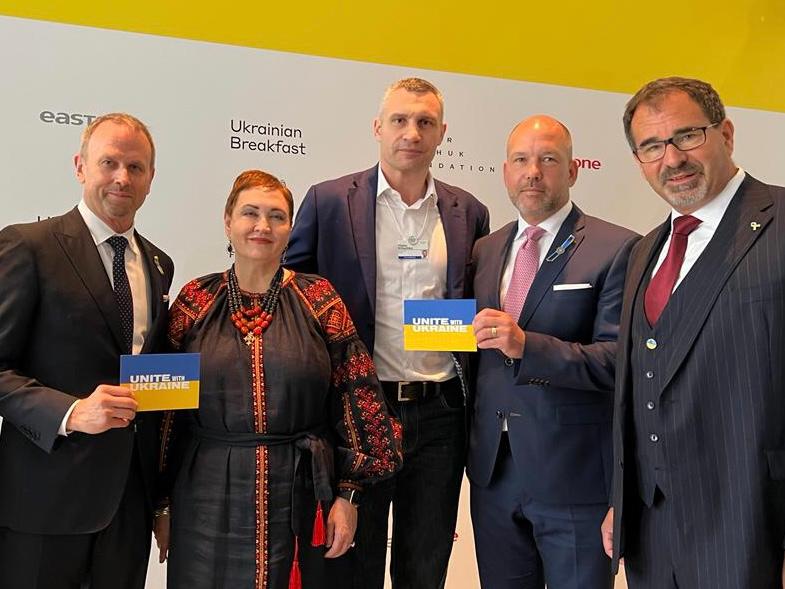 DAVOS - Paul Grod, the President of the Ukrainian World Congress, spoke on a panel this week at Ukraine House Davos alongside Anna Bondarenko, Founder and Chief Executive Officer of ’Ukrainian Volunteer Service, Olga Rudnieva, Executive Director of the Elena Pinchuk Foundation and Coordinator of the HelpUkraine Center Initiative, and Nick Bilogorskiy, Founder and Co-Chairman, Nova Ukraine.

The panel, “Saving Lives in Ukraine: Direct, High-Impact, Rapid Results” focused on what three months of large-scale armed aggression by Russia has done to Ukraine and the suffering and humanitarian crises it has created both in Ukraine and in neighbouring countries and the work that organizations like the Ukrainian World Congress’ #UniteWithUkraine Campaign has done to help the situation.

On the panel Paul explained: “In terms of the Unite with Ukraine campaign, we realised that ultimately Ukraine needs to win the war. That needs to be our focus. There were many organisations doing really important work on delivering humanitarian aid but one area that was lacking was protecting the defenders of Ukraine. Speaking to refugees coming across the border, they were desperate for more equipment to protect their loved ones that stayed behind to fight. We need to make sure those sons, those fathers, those brothers return to their families alive.”

On this matter, through the global #UniteWithUkraine campaign, the Ukrainian World Congress have so far raised over US$23 million which has been used to successfully procure and deliver tactical non-lethal equipment to the frontlines.

Paul also stated: “To my fellow panellists, plus to the entire global community of volunteers and friends of Ukraine – let’s work together. There’s so much we can do much more effectively together… That way we can deliver what is needed much more quickly, more cost-effectively and without all the other issues that come about. So, let’s unite together, let’s unite with Ukraine.”

Following Paul’s comments on the importance of working together, Nick Bilogorskiy committed to taking the matter of joining the #UniteWithUkraine campaign to the board of Nova Ukraine right after the panel.

The panellists also discussed the importance of breaking through Russian propaganda and fake news. Paul emphasised that this aid is getting through and that we cannot let Russia’s propaganda crusade disrupt the supply chain of support to Ukraine. Olga Rudnieva supported this by encouraging people to fact check through Google, international organisations and by speaking to Ukrainians themselves.

To conclude the panel, a final question was asked about whether Ukrainians that have fled can consider coming home yet. The panel was in consensus that it is not appropriate to return home. Nick Bilogorskiy stated: Do not come back yet. Ukraine has not won yet. But we will win. There is no doubt in my mind and there should be none in yours. The cost of that is great and we don’t know what that will be by the end but we are working together to bring that cost down and bring people home.”

An initiative of the Ukrainian World Congress, #UniteWithUkraine is a global fundraising initiative that enables anyone, anywhere to show their support for the Ukrainian people as they fight for freedom, human rights and democracy. Funds raised will be used for supplying an evolving range of needs to people on the front line, including: IFAK - first aid kits; bullet-proof vests and helmets; night-vision goggles; communication equipment and fuel, among other things.

The UWC is also leading global coordination and logistics for the Ukrainian community and other NGO support efforts.

For more information or to donate, please visit our Donate Today page.

Over the past 55 years, UWC has been the voice of the global Ukrainian community. Representing the interests of 20 million Ukrainians living more than 60 countries around the world, the UWC has been actively supporting human rights and democracy in Ukraine. UWC is recognized by the United Nations Economic and Social Council as a non-governmental organization with special consultative status and has a participatory status as an international non-governmental organization with the Council of Europe.