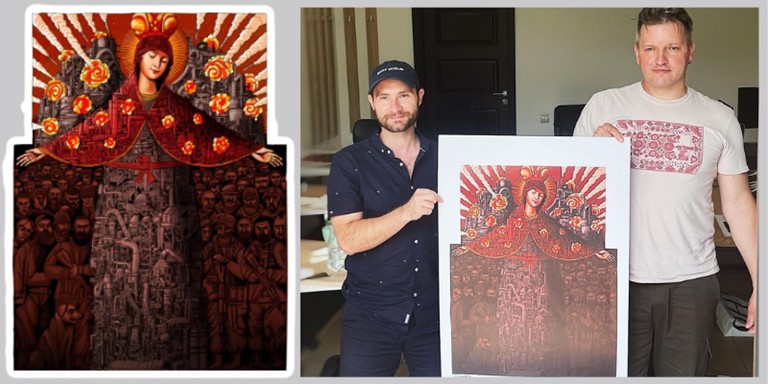 Before the Russian army began its illegal invasion of Ukraine, Christian Borys (CB) decided he wanted to do anything he could to help friends and family back in Ukraine.

He decided to make a few stickers called "Saint Javelin" - a patron Saint protector of Ukraine, carrying a Javelin.

He intended to make a few hundred dollars which he would then use to help Ukrainian orphans who had lost their parents since 2014 when Russia first began its attack on Ukraine.

Six months later, he now has a whole selection of t-shirts, hats, patches, prints and stickers which are sold to help the defenders of Ukraine.

So far, Saint Javelin has donated over US$ 930,000 (CA$1.2M) from their efforts, with US$ 310,000 (CA$ 400,000) donated to Unite With Ukraine. Those funds have been used to immediately procure and deliver protective equipment, including reconnaissance drones to the frontlines.

Christian sat down with Unite With Ukraine (UWU) to talk about his latest fundraising efforts and what he has planned next.

How is Saint Javelin raising funds for Unite With Ukraine?

CB: We've been raising money in a lot of different ways, primarily through our online sales of Saint Javelin clothing and products, but most recently, we've gotten into the art world and have successfully raised nearly US$ 100,000 in just a few days with an art auction. 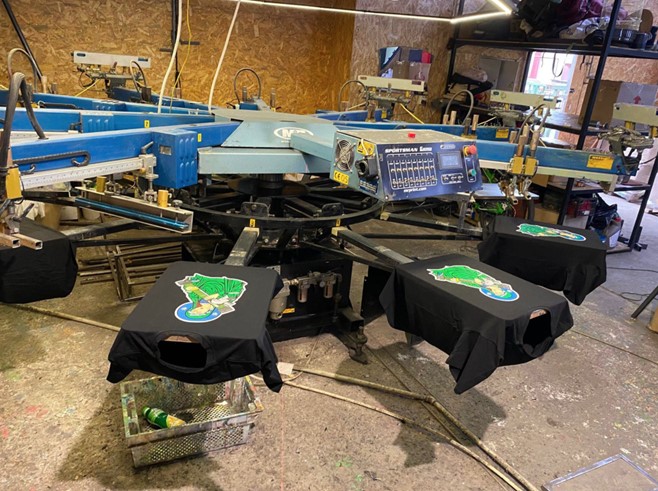 You just held an auction of a piece of Art from a Ukrainian artist, how did the auction go and what will you be doing with the funds?

CB: To put it very simply, we were blown away by the response.

The art is a limited series of prints of an artwork called "Mariupol Pokrova" or "Our Lady of Mariupol" by a Ukrainian artist named Maksym Palenko from Dnipro.

We had them printed in Lviv, Ukraine while I was there to spend a week with some of the Ukrainian members of our Saint Javelin team.

Maksym came to meet us there, and personally signed each print, and then gave a short interview about the artwork he created.

The art is an image of a religious icon protecting Azovstal, the famous fortress in Mariupol where the last remaining Ukrainian soldiers, medics, volunteers and their family members held their ground until they no longer could.

It's a remarkably detailed artwork.

Now that we've auctioned off the first few prints, we're going to put the remaining 70 prints up for sale on our Saint Javelin website at www.saintjavelin.com for US$1,500 each.

You have visited Ukraine and seen the situation on the ground for yourself but you have also been quite positive about Ukrainian manufacturing and a future for Saint Javelin in Ukraine, do you have plans for Saint Javelin to use Ukrainian labor, designers in the future?

CB: Yes, we've already started manufacturing our products in Ukraine, and have been working on that since April when I went to Kyiv to start that process.

The logistics of that is incredibly difficult to put together right now of course but we're dedicated and determined to do it. We've put together a remarkable team of people who are making it happen despite all the complexities involved.

Do you have any other plans for Saint Javelin or any other auctions for fundraising projects coming up?

CB: Yes, one thing we've been working on for a long, long time is the ability to auction pieces of destroyed Russian equipment, in order to raise funds for the Ukrainian military.

We know that there is a huge market for those pieces, and I believe that we can generate millions of dollars for Ukraine from this alone, and I think it can  also have a morale boosting effect because, to me, it's basically saying to the Russian federation, "we're going to rebuild our country using the failures you left behind"

To purchase items from Saint Javelin go to www.saintjavelin.com. To donate to Unite With Ukraine go to Donate page