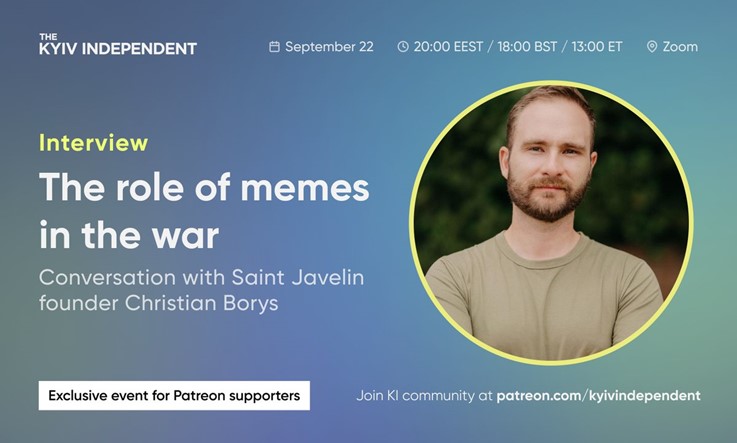 The Kyiv Independent have announced their next community event will be with Christian Borys, founder of Saint Javelin.

Saint Javelin began in Feb. 2020 as an effort to raise $500 to support Ukrainians – and it then went viral. Since then, Saint Javelin has contributed over $1 million to pro-Ukrainian causes.

Christian will talk about starting Saint Javelin, as well as the role of memes since the start of the full-scale Russian invasion, and how it’s built a community online.

The event is scheduled for Thursday, Sept. 22, at 8 p.m. Kyiv time (1 p.m. EDT) and is exclusive to Patreon community members.

The Kyiv Independent is Ukraine’s English-language media outlet, created by journalists who were fired from the Kyiv Post for defending editorial independence.

The Kyiv Post, Ukraine’s global voice, went silent on Nov. 8, 2021, days after celebrating the 26th year of its uninterrupted run.

The publication was shut down by the owner in his attempt to take full control of the newsroom that has always followed the principle of editorial independence.

Yet, the editorial team of the independent Kyiv Post refused to be silenced believing if they couldn’t save the Kyiv Post brand, they could save its values.

On Nov. 11, 2021, over 30 ex-Kyiv Post employees decided to continue the Kyiv Post’s legacy by launching a new publication – the Kyiv Independent.

The following values serve as the backbone of the Kyiv Independent:

The team unanimously chose Olga Rudenko, former deputy chief editor at the Kyiv Post, who dedicated 10 years to the brand, to lead the new publication as editor-in-chief.

The Kyiv Independent provides fair and reliable news on a variety of topics. From Russia’s war against Ukraine and disinformation campaigns to the ongoing pandemic and medical procurement, from human rights in occupied Donbas and Crimea to reforms in Kyiv, nothing will escape the view of the Kyiv Independent.