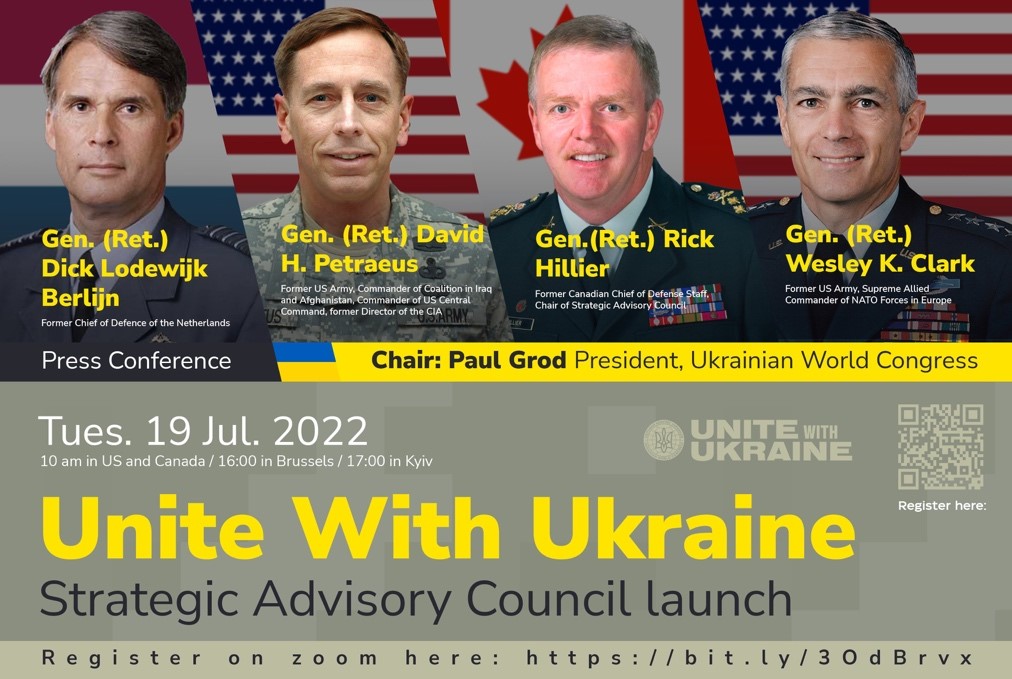 Four of the world’s foremost retired military leaders have come together to form a Strategic Advisory Council (SAC) to support and advise the Ukrainian World Congress’ “Unite with Ukraine” campaign. Bringing unparalleled expertise in warfare and strategy, the SAC is made up of:

This accomplished multinational group of retired military leaders, which is expected to grow, will provide strategic advice and assistance to ensure that the right kit is sourced and provided to the defenders of Ukraine. Efforts will be focused on supplying the recently formed Territorial Defence Force with the protective gear they need to survive, such as helmets, body armour, ballistic goggles, and medical kits.  Additionally, the SAC will provide guidance to assist in purchasing an ‘army’ of 200 reconnaissance drones that can report life-saving information back to Ukrainian field commanders.

General Hillier, the chair of the council, was in Ukraine in early June where he met with Minister of Defense Oleksii Reznikov, senior military advisors and officers, as well as the territorial defenders themselves “If you don’t have a tourniquet on the frontline, you will bleed out and die. I witnessed first-hand the challenge Ukrainians are facing in trying to protect themselves so they can keep fighting. Many have purchased their own gear or scraped together whatever they can, but it’s not enough. The ‘Unite With Ukraine’ campaign has provided some of this vital equipment and we are determined to continue this mission so that the defenders of Ukraine can defeat the Russian army,” said Hillier. “Ukrainians are fighting for their freedom and, ultimately, for ours too,” he continued.

“These people are miners and mothers, bakers and bankers. They are ordinary people like you and me who never imagined they would be risking their lives on a battlefield to defend their homes,” said Paul Grod, President of the Ukrainian World Congress, “The atrocities they have had to witness and the violence that has been forced upon them for no reason is shocking. We have been doing everything possible to raise funds to procure and deliver this vital protective equipment and we are extremely grateful to our newly formed Strategic Advisory Council who are going to bring a new level of expertise and capability to our campaign. It is an honour to have them on board.”

The SAC will also be assisting Unite With Ukraine in its fundraising efforts. “Time is of the essence. People are fighting and dying,” said General Hillier, “The faster we reach or exceed our goal, the more lives we can save.”

Donations can be made through the web site www.unitewithukraine.com