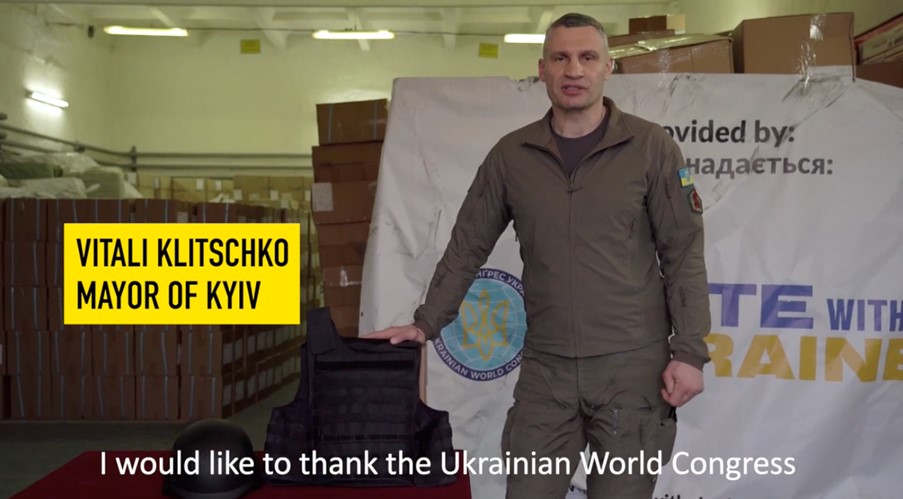 (Kyiv)  - A shipment of body armour and helmets worth over $4.75 million USD ($6 million CDN) has recently reached the Mayor of Kyiv, Vitali Klitschko, thanks for the Ukrainian World Congress' #UniteWithUkraine campaign. It's part of the over $21 million USD ($27 million CDN) raised so far worldwide, with the delivery coordinated through the hard work of volunteers operating between Poland and the front lines in Ukraine.

"I want to personally thank the Ukrainian World Congress who have made the delivery of this equipment possible," Klitschko said. "This delivery has come at a crucial time for our defenders, and we will immediately be sending it to our ground forces so they can continue to fight off the Russian invasion. I am asking all supporters to donate whatever they can so that we can continue to get this and more equipment where it is needed most."

After 10 weeks of fighting, this equipment is as important as ever to hold off the brutal Russian invasion. As the courageous defenders of Ukraine risk their lives every day for Ukraine’s freedom, dignity and democracy, the Ukrainian World Congress would like to thank all involved in this delivery – both in raising the funds to make it possible and then physically distributing it on the ground.

"I am extremely proud of what the Ukrainian World Congress has been able to achieve during this most difficult time for our country and today’s delivery has been incredibly important for us to achieve," UWC President Paul Grod said. "Of course, I wish we would not have had to put in this enormous effort and that this senseless war was not happening but all the volunteers and supporters of the UWC have shown themselves to be resourceful and resilient."

The Ukrainian World Congress continues to pursue every avenue of support to provide life-saving protective equipment to the heroic defenders of Ukraine.