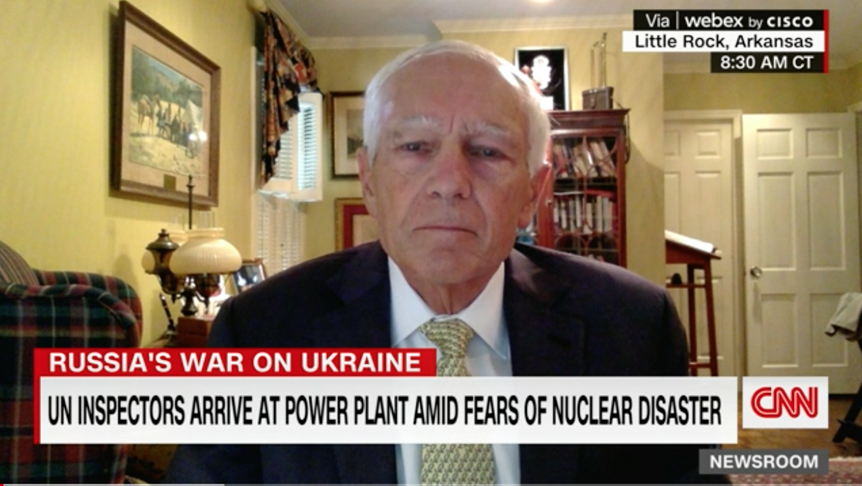 General Clark, always good to have you on. First, I want to get your sense right now of the ongoing danger to the plant now that IAEA inspectors at least have been allowed to go there.

Well, I think there is always danger to the plants. Something like this is in the middle of a conflict zone. But, Jim, this is also the way that the Russians have manipulated the situation. Think of this in medieval terms as a fortress. You can put your forces in it, and it's unassailable, so the Ukrainians can't afford to shoot at it because they'll destroy it. Putin's forces use it as a base, and so it's not only good militarily, but it's also good to distract public attention. So while we're focused on this, the Russian Filtration camps continue, war crimes continue, and we're watching this all manufactured by Russia.

Yeah, it's a smart point there. I do want to ask you because this week we've seen the first steps in a significant Ukrainian counter offensive in the south focused on Kherson. Do Ukrainian forces today have the capabilities and the weapons they need to take and hold territory currently held by Russian forces?

Well, certainly not, but they do have the capability, if they use it correctly, to move deeply into at least Kherson. If they've succeeded in cutting off Russian reinforcements and resupply across the Dnieper river, that's a big step. And then if the Russian command and control is attacked, that's another big step. And they've got artillery, they are using it. This is a reconnaissance lead attack that's going to move slowly. It's going to grind its way through. They're going to conserve their forces. But to really clean the Russians out, they need armored fighting vehicles, more artillery. They need air fighter bombers and long range ATACMS missiles. So they're a long way from having everything they need. But this is a very important attack, strategic and politically, for Ukraine.

General Clark spent 34 years in the U.S. Army, receiving dozens of military decorations, several honorary knighthoods, including and the Presidential Medal of Freedom and remains one of the longest-serving, decorated and honoured members of the U.S. Armed Forces as a four-star general.

Clark’s career includes serving as Supreme Allied Commander Europe of NATO from 1997 to 2000, commanding Operation Allied Force during the Kosovo War, and was a major author of the Dayton Peace Accords that prevented ethnic cleansing.

Clark earned his second Legion of Merit for his work in the offices of the Chief and Deputy Chiefs of Staff of the U.S. Army from 1983 to 1984.

A decorated war veteran who served in Vietnam, despite being severely injured, went on to command several more battalions.

Graduating first class as valedictorian in 1966 at West Point, Clark was also a Rhodes Scholar at the University of Oxford and graduated from the Command and General Staff College with a master’s in military science.

Other Career Highlights and Awards

Our goal is to present Ukraine with an "Army of Drones" – real support from Ukrainians worldwide. To participate, you need to make a donation to UWC's UniteWithUkraine campaign. With the collected funds, UWC will purchase drones selected by the Ministry of Defense of Ukraine. We will mark each drone for the specific contributing community or organization.