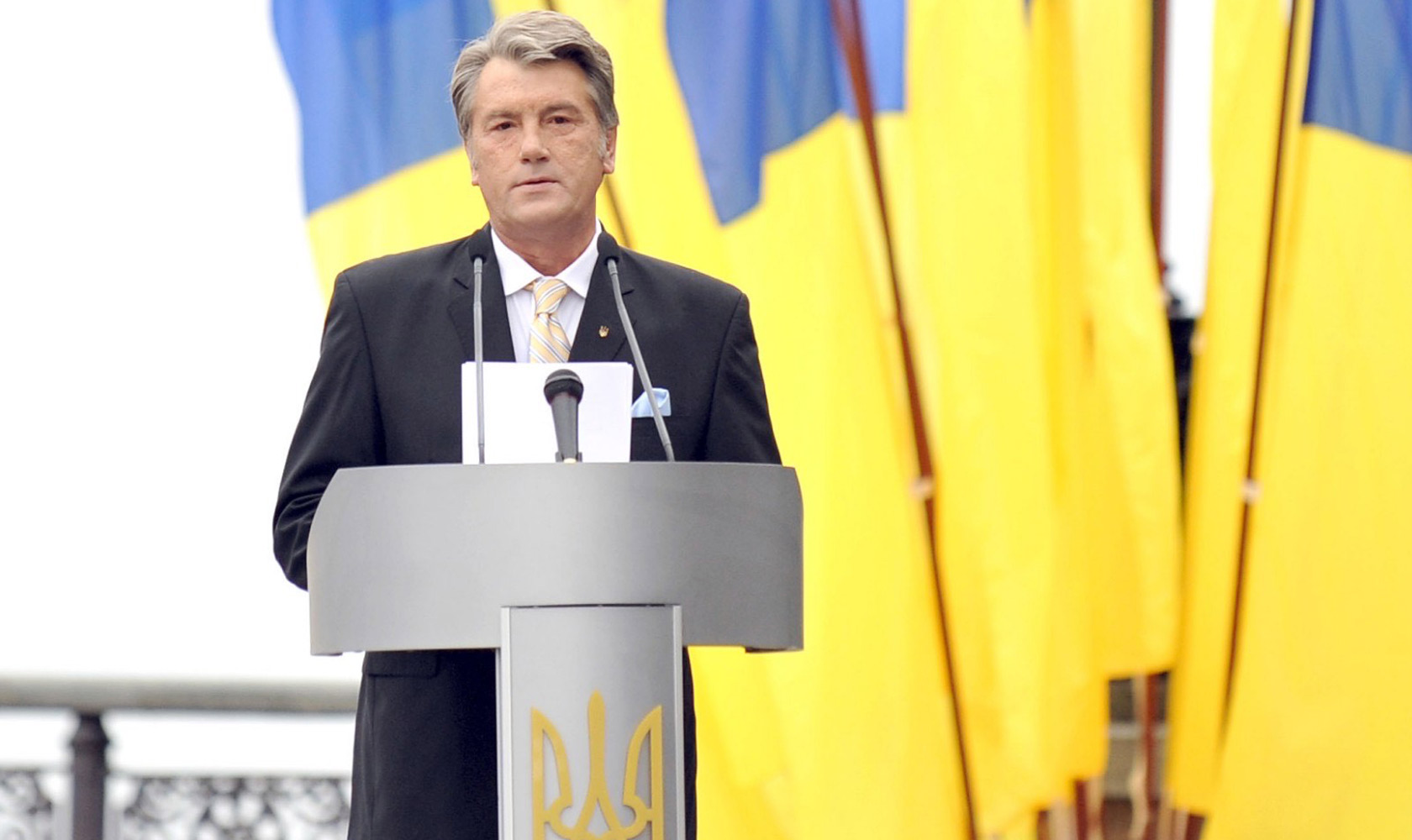 Viktor Yushchenko was the president of Ukraine from 2005 to 2010

“Ukrainians are not only fighting for Ukraine, but we are also fighting to preserve the values of freedom and democracy,” said Viktor Yushchenko.

Everyone has a part to play to defeat Russian aggression, whether that is fighting on the frontlines or lobbying for support around the world.

“International solidarity is the best weapon we have against Russia’s dictator. We must stay united and resolute. Join me and unite with Ukraine. Together, we can help the brave defenders of Ukraine win this war,” he continued.

Share this online and help us to spread the word!

I’ve dealt with Putin before: I know what it will take to defeat this brutal despot

Maksym Kurochkin is a playwright. For almost three years, he and 20 other Ukrainian playwrights had been planning to build a new theatre in the heart of Old Kyiv. The group found a magnificent old structure that they were busy renovating in order to open the Playwrights’ theatre on 12 March. On 24 February, Maksym and his colleagues awoke to the horrific sound of bombs. 12 March came and went. Instead of planning a grand opening for a new theatre, Maksym is now examining military strategies to defeat the Russian invaders. Instead of a pen in his hand, he now carries a weapon.

It is two months since the Russian army illegally crossed our borders. They have been failing ever since in their attempts to invade Ukraine. Part of the reason for their failure is that they were not expecting to meet such fierce and heroic resistance, both from our sophisticated military and from territorial defenders like Maksym who, when faced with the reality of the Russian invasion, decided to take up arms and fight.

Many of these brave territorial defenders, including my own daughter, who immediately signed up once the war began, have never had any military training or been in any kind of conflict situation. Stories like that of the young couple who pushed their wedding day forward in order to join the territorial defence force, or the comedian who usually helps veterans get over their trauma but has decided to become a fighter himself, show you the unbreakable spirit of the Ukrainian people. Tragically, some of these defenders have fallen in battle. Others have been beaten and killed in cities such as Bucha, Kharkiv and Mariupol. We will not know how many of our citizens have died until we open the mass graves and clear the rubble of our razed cities.

As shocking as these stories are to hear, this is exactly what we should expect from the savage Russian army led by the dictator Vladimir Putin. My own history with Putin goes back to 2000, when we were both prime ministers of our respective countries. It was only when I ran to be president of Ukraine in 2004 that he actively campaigned against me. The extreme lengths he was willing to go to in order to get what he wanted became clear. I could not allow this to deter me; after I won, I realised that I needed to try to keep a workable relationship with him as the leader of our neighbour in the east. But the Putin I dealt with then no longer exists. He has since become a completely isolated and brutal despot who cannot stand any opposition.

One of the greatest weapons we now have against Putin is international solidarity and support. This is something that really bothers him. I know that, while news about our war made headlines all over the world and dominated the

global conversation for several weeks, interest in stories of our territorial defenders is starting to wane. Fatigue towards the horrors of war is sadly common; we saw this with Syria, Yemen and our own Donbas. But those of us in Ukraine cannot afford to feel fatigued, or else we risk losing sight of victory. Our strength is now more important than ever. Although various Russian retreats are taking place, we hear stories that Russian troops are regrouping and planning to continue their attack. It is now that we must resolve to win this war.

We cannot do this without external support. This war is a defining moment, not just in Ukrainian history, but in defence of democracy. This is not just a regional conflict between Ukraine and Russia but a fight against tyranny and imperialism. Our army continues to need weapons and military assistance from all our allies. And we need monetary assistance to help us plug the holes that this war is blowing in our previously strong economy. Our leadership is not only at the forefront of the war with Russia, but is also fighting behind battle lines – in the safety of international offices and institutions – to secure the support from allies that we need in order to restore peace and freedom to Ukraine.

At the same time, we have an army of volunteers who must keep supplying our territorial defenders with the protective equipment they need in order to keep fighting on the frontlines. Thankfully, civil society organisations such as the Ukrainian World Congress have worked tirelessly to ensure a steady stream of non-lethal supplies to our defenders. They have also mounted a mammoth effort to advocate for our allies to send the weapons we desperately need, and impose the economic blockades and sanctions necessary to defeat Russian aggression. Our defenders will keep fighting until we finally achieve victory, and our supporters will keep doing everything they can to help them.

I strongly believe that victory for Ukraine is inevitable. When ordinary Ukrainians give everything up to fight for their freedom and dignity, victory is the only option. I cannot wait for the day when this war is finally over and Maksym and his colleagues will be able to open their theatre and stage new plays written by brave and defiant playwrights who will focus not on propaganda, but on their own voices and ideas. Today, we fight for freedom. Tomorrow, we will watch the plays of our authors who won this freedom, defining what it means to be Ukrainian.