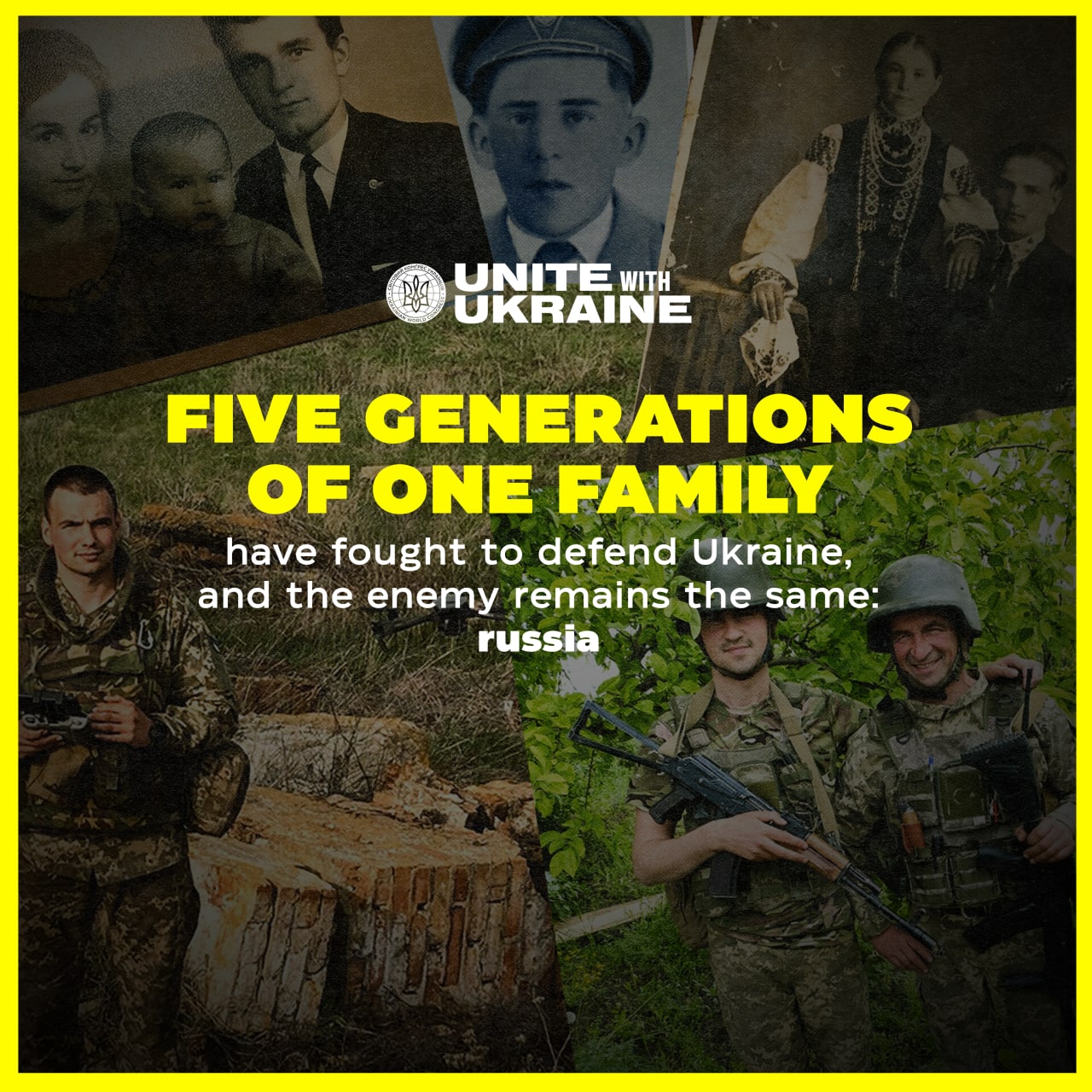 “Dad died in an accident in 1983,” recalls Vasyl Hladenky, 57, “but I assure you, that I’m continuing our family’s cause, and am also fighting for Ukraine. As are my sons. Both our generations must finally defeat Russia, and put an end to this fight.”

Hladenky has raised three sons and three adopted daughters. The eldest son moved to the Czech Republic with his family years ago. So, when Vasyl Hladenky and his two younger sons set off to fight for Ukraine in February of this year, a clear historical-hereditary pattern emerged: all the generations of men in the Hladenky family have fought for Ukraine over the course of the last 100 years!

Vasyl’s great-grandfather was a well-educated officer in the Ukrainian Galician Army; he died for Ukraine.

Vasyl’s grandfather served in the Ukrainian Insurgent Army; his nom de guerre was “Chervony,” and he was an officer in “Bey’s” company. In the winter of 1946, his unit was surrounded by NKVD forces. The boys fought back, firing all their bullets; they saved the last few rounds for themselves, and took their own lives, in order to avoid surrender.

Vasyl’s father was exiled to Kazakhstan for being the son of an “enemy of the people.” He was only allowed to return to Ukraine in 1956, three years after Stalin's death.

Today, Vasyl Hladenky and his two sons are fighting in the Armed Forces of Ukraine (AFU), in the ranks of the 128th Separate Mountain Zakarpattya Brigade. Five generations of this family’s men have fought for Ukraine, against an enemy that remains one and the same: russia.

This is Vasyl’s second tour of duty with the AFU; his profession in civilian life is far more peaceful: he teaches blacksmithing at the Broshniv Professional Forestry Lyceum, that is located in the Carpathian foothills. When russia attacked Ukraine in 2014, he first began volunteering, and then, went east to help build military fortifications. “They wouldn't take me into the army: firstly, because I'm a teacher, and, secondly, because I’m the father of multiple children. Then, in 2015, I finally convinced the military commissar, and joined the AFU’s 128th Mountain Brigade. I commanded a mortar unit, fought in the east for an entire year, and then, after demobilization, went back to teaching.”

After russia’s full-scale invasion in February of this year, Hladenky reported to the Military Commissariat along with his sons. All three applied to join the 128th Brigade. Initially, the Military Commissariat was categorically against having the entire family serve in the same combat unit, and suggested that the older son enlist in the Territorial Defense Forces instead. But Vasyl insisted that his family serves together.

“I went back to the mortar unit. I wanted both my sons with me, but that didn't work out. My younger son, Yuri, 22, has two university degrees, has completed military training, and is an officer. So, he was appointed deputy company commander in one of our brigade’s other units. The older son, Andriy, 24, also has a degree, but no military training. So, he serves with me as a mortar gunner.”

The Hladenkys’ eldest daughter, Sofia, 20, also serves in the armed forces, as an officer in the National Guard of Ukraine.

“We couldn’t not go to the front, that wasn’t even an option,” explains Andriy Hladenky. “I’m glad that I am serving with my father, and I’m sorry that my younger brother is in another unit, but we always stay in touch.”

Mortar gunner Andriy Hladenky was recently injured in combat after his unit came under enemy fire. Fortunately, the injury was not serious, and Andriy plans on returning to his unit once he has recovered.

In peacetime, Andriy is an active member of the Plast scouting organization. With the outbreak of full-scale war, many of his fellow Plast members joined the AFU. “Practically all the members of our local Plast branch are now in the army,” says Vasyl, “Plast teaches you to be faithful to God and to Ukraine. In times of peace, we focus on God, but right now, it’s about Ukraine.”

(Excerpted from “Five generations of our family have fought for Ukraine, and the enemy remains the same: russia” by Yaroslav Halas, 128th Brigade officer and journalist, for Ukrainska Pravda)