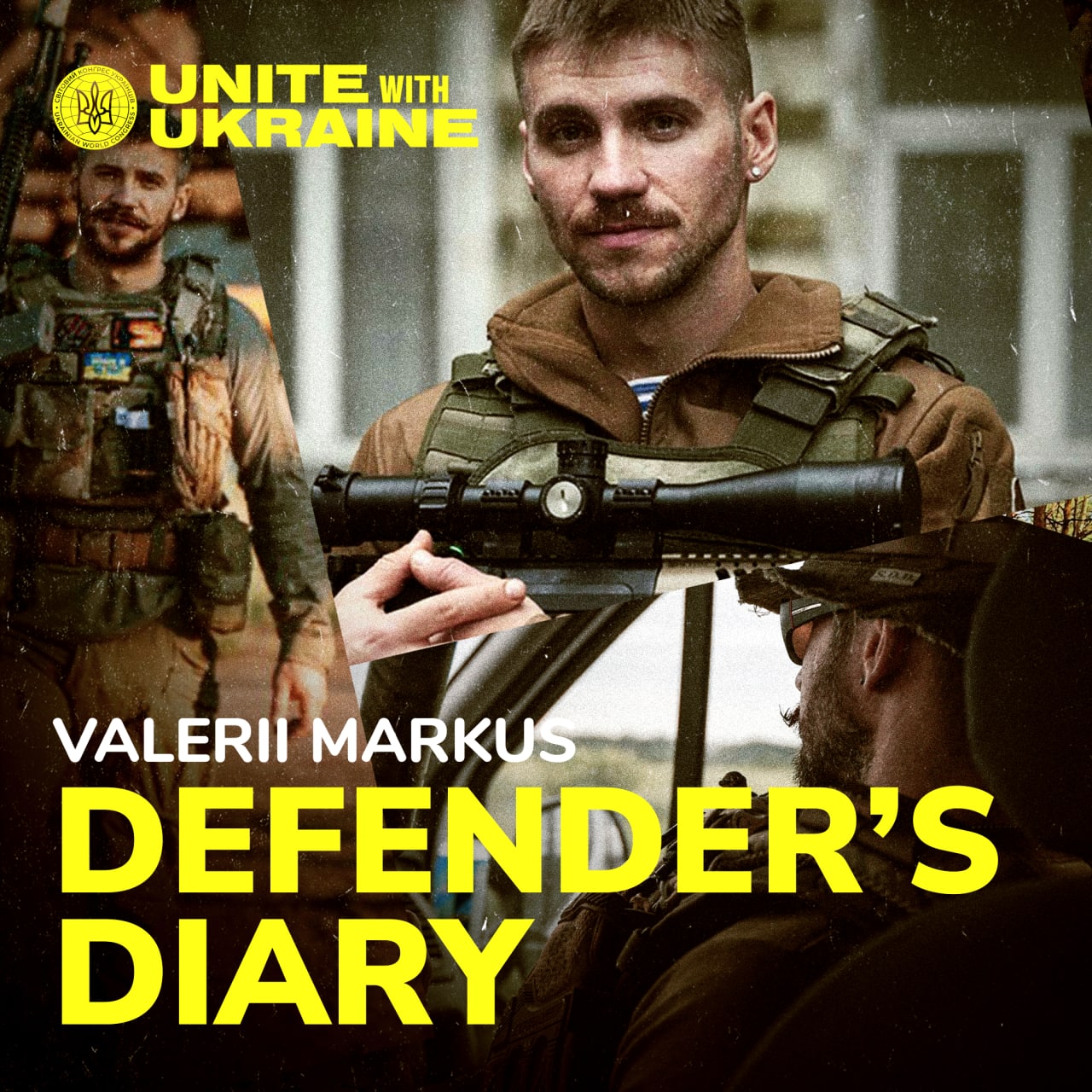 Valerii Markus, 29. Ukrainian soldier, veteran of the Russian-Ukrainian war, writer, blogger and traveler, head master sergeant of the 47th separate battalion. Read about what putin really is, and why every Ukrainian is now fighting for their survival in Valery's diary.

Czech journalists contacted me yesterday, seeking my comment on the image of Putin in a body bag on the wall of the Czech Ministry of Internal Affairs. Their question was: Where is the line between what is appropriate and what is not, in context of wartime morality? Apparently, opinions are divided in the Czech Republic. They asked me, because a translation of my book, “Footprints on the Way” was recently published in the Czech Republic, where the issue of morality comes up often. Initially, I declined to comment, because any Czechs who ask these types of questions about an image, would definitely not like my answer. But then I decided to send them a detailed response, which I am sharing with you here:

The use of any image of Putin is outside the bounds of any imaginary or existing scale of moral values. He is not quite human. Psychopathy is a clinical phenomenon whose essence boils down to the lack of empathy for other people. A psychopath who has achieved absolute power turns into a function: a biological mechanism for achieving a goal. This mechanism learns facial expressions, tone, and general behavior to be like other people. It learns their motivations, emotions and experiences in order to be able to manipulate them. Such a psychopath, in most cases, is very effective in achieving his goals, since he lacks moral principles. The ability to manipulate others is honed to mastery, because it is his only tool for survival.

History has known several examples of such rulers. The most famous was hitler, today, it is putin. You ponder whether a poster showing a body bag is immoral, while he, without giving it a second thought, orders that Ukrainian prisoners be burned prisoners alive in Olenivka. Not because he’s sadistic, but simply because that’s an appropriate action in his paradigm of the world. He does not burn them personally; he simply gives the order. Or his order to erase Mariupol from the face of the Earth. Yes, 50 to 60 thousand people died; yes, the myth that he is protecting Russian-speakers was ruined (Mariupol was a 90% Russian-speaking city), but such “annoyances” mean nothing when it comes to achieving his goal.

He would easily burn Kyiv, or Warsaw, or Prague in a nuclear inferno, because it’s just another instrument for achieving his goal. hitler built the Reich, putin wants to go down in history as the man who restored the Russian Empire. This may seem like a primitive goal to a modern European person, but for a Russian, this is the grand dream. That is why he is able to manipulate his people so easily: they share his goal; most Russians strive for the same thing. It's just that most of them can’t simply kill a child like that; such a deed must be legitimized by an order from above. And putin issues such orders. That is why, from a russian’s point of view, he is the ideal ruler.

The story with this poster has nothing to do with the boundaries of morality that are described in my book. The real limit comes when you can do anything you want, satisfy any of your passions, when you have a weapon, and there is no one around to stop you. Only you and your moral values. But an oversized poster...

You don't quite understand what Ukrainians are currently dealing with. He wants to destroy us simply because we do not agree with him. We resist. If he could, he would destroy us all: men, children, and women, because we won’t let him achieve his goal. Our war is one of survival. Those who call on us to stop fighting do not understand this reality. If we stop, every one of us, including the children, will have only two options: death or slavery. Those who become slaves will go on to fight for putin in another war, with Moldova, for example, or with Lithuania, or Poland. Because these countries are, just like all the countries of the former Warsaw Pact, part of the Russian Empire. I am sure that, had we surrendered after a week, as he had expected, war would have already been raging elsewhere, including on the streets of Prague.

To be honest, the discussion about the morality or immorality of putin depicted in a body bag, seems empty to me (and not only to me). It’s about nothing. Most Ukrainians, particularly those who have lost relatives, would simply k*ll him. That is the way to switch off the deadly mechanism that threatens the existence of your people, family, society, culture. That’s what is important: to turn off the deadly biological mechanism, which bears the surname putin and somehow resembles a human. As for how that is depicted is at the artists’ discretion; they are creative people with a strong sense of humanity’s current emotional states. Let them create: they will leave the historical legacy that will pass this emotion on to our descendants.