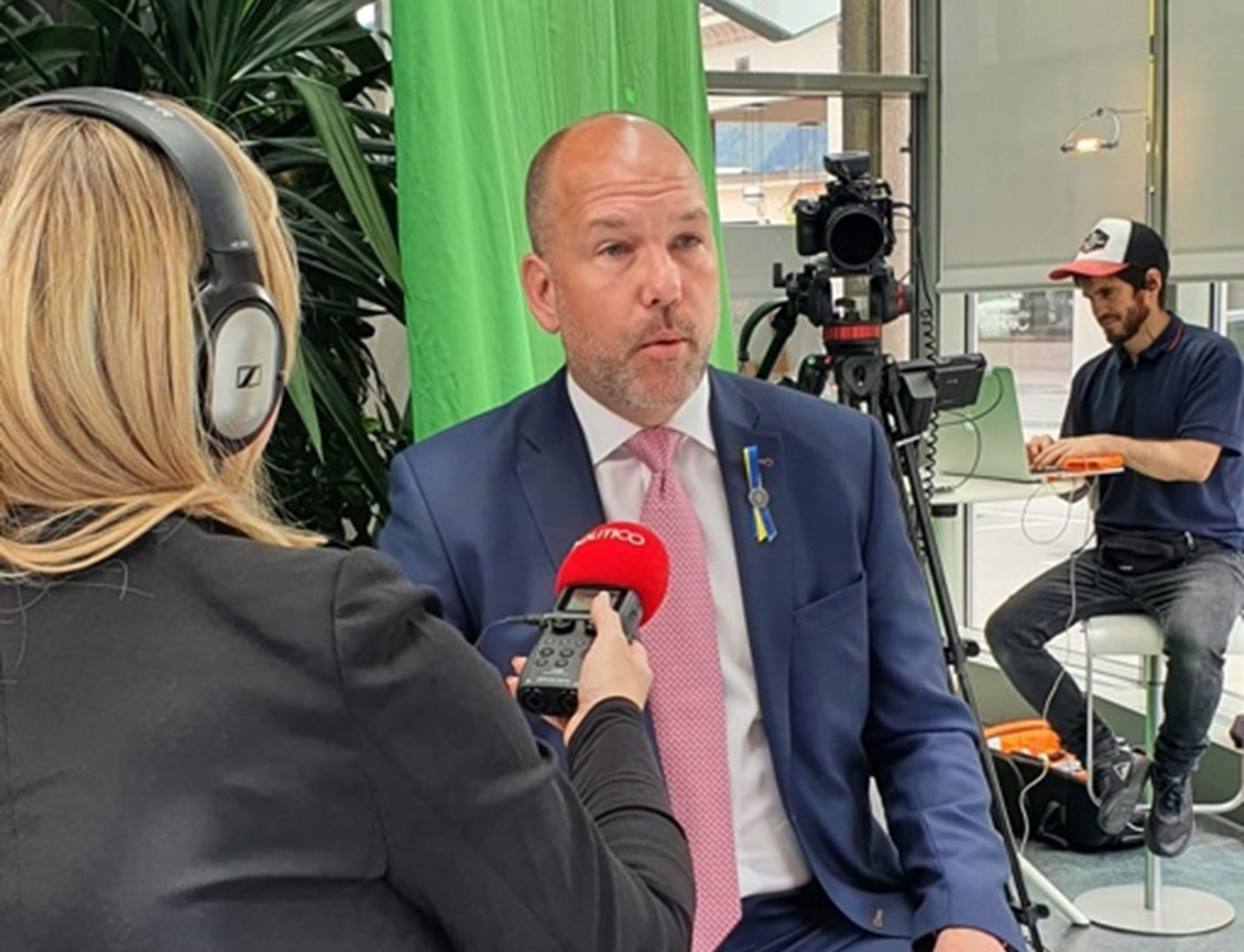 This special edition of EU Confidential from the World Economic Forum in Davos, Switzerland drills into the question of whether the EU is really ready for a forceful response to Russia’s invasion of Ukraine.

Paul Grod, President of the Ukrainian World Congress, speaks to Sarah Wheaton about how the Ukrainian diaspora is keeping up the pressure on Europe.

Paul Grod: Hi, I’m Paul Grod, I’m the President of the Ukrainian World Congress which is an umbrella organization bringing together Ukrainian communities in over 65 countries around the world and we’re a ‘not for profit’ and our objective is to represent the interests of the global Ukrainian diaspora.  This year, Davos has been Ukraine and so being at the epicentre here has been quite fascinating.  It’s wonderful to see the outpouring of support but we need to transcend from words to deeds and we need to see more leadership.  We have to stop waiting for the Americans all the time to lead and I think this is a great opportunity for the European countries to take the leadership and we’ve seen a new resolve over the last several weeks to stand up to Russia, but we need to make bolder steps, we need to go much, much further cause right now Russia is not suffering financially. The sanctions are not biting hard enough and that is not deterring Russia’s war machine, and quite frankly with the high gas prices the state budget or Russia is very well financed, and the war effort is very financed and until this war stops we’re going to have the suffering, the war crimes, the deaths, the destruction that will have to be rebuilt and there will need to be EU funds dedicated to rebuilding so the longer the war goes on, the bigger the bill is going to be. That’s number one, speaking very bluntly on that but the deaths, the tens of thousands of deaths, the suffering, the rapes, all the human tragedy that is coming from Russia’s invasion of Ukraine. We need to see stronger resolve on sanctions, stronger support militarily for Ukraine because it is a very difficult war.  Even though Ukraine is holding back they’re incurring significant, significant losses and so we need the European Union, we need countries like Germany and France to really step up and show that leadership in supporting Ukraine, both militarily and economically.

Sarah Wheaton: Commissioner President, Ursula Von der Leyen actually told us that the gathering of EU leaders next week is not likely to come to a final agreement on the six sanctions package, what’s you sense of what’s holding things up and what message would you give to those national political leaders who are really at the core of hammering this out?

Paul Grod: Well, we’re expecting they are also going to be talking about Ukraine’s EU candidacy.  That is something we are strongly advocating for as a global organization which brings together Ukrainian communities in 65 countries around the world.  We’re very disappointed with that lack of resolve, I think it is coming from the fact that many European Countries are not prepared for and are not diversified in their energy policy.  Energy policy is the biggest weak point that Russia has exploited with many European countries and some countries have seen this like Poland for example, and Croatia, and other countries who have become independent of Russian gas having sufficiently diversified and we need to see Europe step forward.  That’s the biggest concern, what happens if Russia cuts off the gas supply and Russia knows that and they’re continuing to exploit that, so we really need to see that leadership and it needs to come from Germany and France.

Sarah Wheaton: So, you don’t think Hungary is a problem?

Paul Grod: I think Hungary is a significant problem but the reality is Hungary will go along if Germany is saying, this is where we are going. Orbán is going to be difficult regardless but that mean that we couldn’t overcome things like sanctions because Hungary did adopt the first five packages of sanctions and if you’ve got strong leadership from the key countries in Europe then they will come along.

Sarah Wheaton: We’ve also seen Ukrainian have to flee all over the world and all over Europe and obviously we don’t know how long this conflict is going to last but what’s your sense of to what extent people will want to go home to Ukraine as opposed to becoming a part of the already large Ukrainian diaspora?

Paul Grod: You know, it’s very interesting because as I have been watching the various waves of immigration since independence you can look at different waves and to date many have been economic.  Today, these immigrants have fled because of fear for their lives and all the refugees, and I have met many, many refugees – I’ve been on the Polish-Ukrainian border several times, meeting them all over the world as I travel and they all say the same thing, we want to go home. I met many refugees who originally wanted to come to Canada, wanted to come to the United States and they are still in Poland because they want to stay close. They say, we’re going to come back and even when there is an opportunity for them to go visit, they do that, when it is safe enough for them to go visit.  I find that this group of refugees want to return and because many of them have left their sons, their fathers, and their husbands.

Sarah Wheaton: What does Ukraine look like after the war, especially if it does have aspirations to join the European Union?

Paul Grod: Just to be clear, we have to win the war first, right. I’m hearing in Davos, a lot of discussion amongst business leaders, let’s start talking about the positives stories, let’s start talking about what does Ukraine look like after the war, the rebuilding, all the great economic prosperity, all the business we can do by rebuilding Ukraine that is what the buzz is here in Davos right now but we want a reality check – we have to win the war first and that has to be the focus.  Ukraine, prior to the war was struggling with the transformation from a Soviet past, a very corrupt past where they were taking very bold moves to change.  It is one thing to talk about it but do you do to really change that and they have made very concrete steps, especially on digitization so they are digitizing everything so it is much more transparent, for example if you need a special document and you need to go to somebody and pay a bride to get that special permit, or whatever it is, like a building permit, now through a digitization process all that disappears.  There is lots to do but they are certainly on the right direction.  The other part of it is the green economy and really focusing on Ukraine being an energy superpower now there is an interconnection between the rest of Europe and Ukraine, electricity interconnection, that’s also going to be a great source.  So Ukraine will be a powerhouse once we get out of this war but first we have to win the war.